As a longtime Californian, a few things stand out among my impressions of the Great Plains and Midwest:

Open space.  Driving north on U.S. 85 from Spearfish, South Dakota to Belfield, North Dakota, we saw hayfields on either side of the road, and little else.  Waving grasses across the flat land, broken occasionally by a little rise, followed by more long views.  In California, hay is generally bundled into large rectangular bales, but here it is rolled up in what looks like giant jelly rolls, some sealed in plastic.  The few tiny towns we encountered consisted of a church, a school, a bar, perhaps a convenience store or tractor parts shop, and a few houses.  And cows, lots of cattle.  My wife says it’s like Little House on the Prairie, while visions of Ole Rølvaag’s character Per Hansa come to my mind.

Green.  It feels as if we’ve fled the burning of California.  Ten days ago, we made a quick trip from Sacramento to Los Angeles and back for work.  Down on Thursday, home on Friday. We drove south on Interstate 5, only to find ourselves stopped on the Grapevine, just short of Santa Clarita, as firefighters battled a blaze not far from the road.  Following this delay, we vowed to return by another route.  Heading north on Highway 101, we encountered more fires, marked by huge plumes of smoke that could be seen for miles.  Meanwhile, back in our own neck of the woods, half of Butte County was evacuated as a result of the Wall Fire.  The hot summer has left California an amalgam of grasses burned brown by the sun and earth scorched black by flames.  But here in the Dakotas, Minnesota and Wisconsin, the lush greenness feels like another world.  The millions of evergreens of the Black Hills gave way to the Dakota grasslands.  Finally, the deep green of the leafy trees lining both sides of the local roads here in the upper Midwest soothe my soul and remind me of my childhood in the East.

Casinos.  I had no idea of the extent to which gambling has taken hold in Montana and the Dakotas.  Just about every town has a few video slots at the local gas station/convenience store.  And, no, I refuse to dilute its image by calling it “gaming,” as all the roadside signs do.  Is that, like, hunting big game?  Or video games like Xbox and Atari?  I know!  I’m headed across the country to Springfield, Massachusetts to participate in six days of gaming.  Scrabble is a game, right? 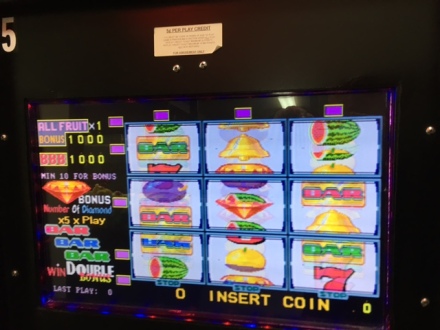 Nickel pokey at a truck stop in Osseo, Wisconsin

Friendliness.  I am impressed by how nice everyone is.  Nearly everyone we have encountered has treated us as valued guests, from waitresses to hotel desk clerks to store personnel. It seems everyone wants to know where we’re from, where we’re going and what route we’re taking to get there.  As a native New Yorker who now calls California home, this is not something I’m used to.  It is heartening that the brusque  “Whaddya want?” attitude, so pervasive on the coasts, has not seeped into the American heartland.  This gives me hope for humanity.