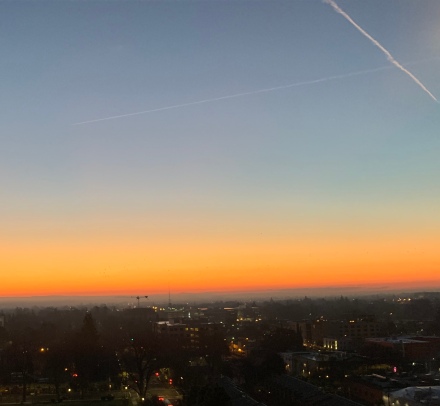 Gooooood morning, Sacramento! What time is it? Oh five hundred. What does the O stand for? Oh, my God, it’s early!

That’s the latest that I need to haul myself out of bed if I’m driving into the city for another day at the job. It gives me about 90 minutes to get ready and still make it out the door by 5 am. Any later and the likelihood of availability of the one and only handicapped parking space that allows all-day parking and is close to my office rapidly approaches zero, like the curvilinear graphs I remember from calculus class.

Looking on the bright side, I get to witness God’s handiwork every morning, as the sky is brushed with purple, pink and gold. It’s an inspiring start to my day.

My morning commute destination: My parking space, when I can snag it. At least it’s under a leafy tree, shading my car all day from the 100 degree plus afternoon temperatures that we’ve been experiencing lately.

I try to balance my need to awaken in the pre-dawn hours with my desire to spend time with my wife in the evenings. Eight hours of sleep would require me to be in bed by 7:30 pm, which (let’s face it) is not terribly conducive to a reasonably normal family life. My bedtime was later than that when I was eight years old.

An approach I have been taking involves splitting the difference by taking a nap as soon as I walk in the door and then getting up later to have dinner and family time. On one level this works well, as I am invariably exhausted when I get home. But the experts warn that splitting up sleep time like this deprives the brain of its vital REM cycles and the body of opportunities to replace its supply of melatonin. I tend to compensate by engaging in marathon sleep sessions on the weekends. On Friday evenings, I want to say “Don’t wake me up til Monday morning.”

I am extremely grateful to my wife, who drives me in to work and returns to pick me up twice a week. I look forward to those days, as I get to sleep until 5 am and then nap in the passenger seat during the commute. But it means that my wife must make two round-trips, leaving a severe dent in her schedule. And it costs us twice as much at the gas pump.

No one said living in the exurbs was going to be easy.

On average, my morning commute takes about 40 minutes and my return in the evening about ten minutes longer. My previous concern was that my evening commute time would double due to the need to take surface streets out of Sacramento to avoid the harrowing experience of entering the freeway at the metering lights downtown. True, at times the two-lane merge can be nerve-wracking, but I find that I am starting to get used to it. It seems to be just a matter of signaling, making eye contact, and then muscling your way into the flow of traffic as if it’s your God-given right. There may be some so-and-so who’s determined not to let you in, but you can’t let it faze you. The attitude has to be “here I come, so get out of the way. Oh, you’d prefer to rear-end or sideswipe me and raise your insurance rates? Make my day, pilgrim.”

No, the problem is not the loonies with whom you have to share the road. As has famously been said, “we have found the enemy, and the enemy is us.” My chief adversary out on the road is myself alone.

This is not to say that I won’t end up in a wreck eventually. If I do the commuting dance long enough, the odds are simply not in my favor (particularly in light of my already dented, scratched and crunched driving record). More than likely, however, the day of infamy will arrive when I fall asleep while tooling down Highway 99 at 70 miles per hour.

I’ve tried just about everything to stay awake on the drive home. I keep the windows open, blast the music, sing, slap my face. I drink coffee in the afternoon and sip a Pepsi on the road. Sooner or later, however, I catch myself nodding off. It’s been a long day and the road is monotonous. More than once already I’ve reached my exit with little memory of how I got there. I guess my horse knows the way home.

All I can do at this point is count the years remaining until retirement and hope that, in the meantime, I’m not awakened by an exploding air bag to the face.

And with that I shall say good night. 3:30 am comes early.