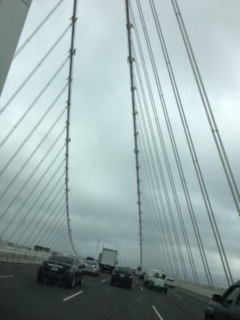 The elegant lines of the Bay Bridge, crossing from San Francisco to Oakland.

As I have visited the famed City by the Bay only a handful of times over the years, it always seems new to me.  It’s a case of what Joseph Heller referred to as jamais vu — it’s as if I’ve never seen the place before.

I first encountered San Francisco in the 1980s, during a visit with my sister, who had recently married and moved across the country to Silicon Valley.  Guidebook in hand, I boarded a northbound Caltrain in San José, determined to hoof it around the city to all the famed tourist spots.  I visited Golden Gate Park and the Exploratorium, took a cab ride down twisting Lombard Street, communed with the ghosts of poets at City Lights Bookstore and tasted the culinary delights of Chinatown.  I got on the plane back to New York with an avocado sandwich in my carry-on, singing “California Dreamin'” and vowing to return.

Two months later, I flew west again, this time with my parents.  I rode the cable cars (standing up and hanging on for dear life, trying my hardest not to lose my Fisherman’s Wharf lunch), stuffed myself into a chocolate coma at Ghirardelli’s and drove across the Golden Gate Bridge to Sausalito with my father.  Dad, a lifelong student of infamous American mobsters, could not pass up the excursion to Alcatraz.  I stayed behind, as I don’t much care for the turbulence of boat rides.

Ten years later, I moved to California.  And yet, I hadn’t been back to San Francisco since, unless you count passing through on the freeway or flying into SFO airport.  But this week, I found myself back in downtown SF, conducting two days of training classes.  To have seen me gawk, you’d think I’d never been there before.  Sunrise over the bay, the incredible geometry of the Bay Bridge, the late afternoon fog slowly rolling in from the ocean to slide a shroud over the high-rise buildings in the business district.

But before we headed up the peninsula to the Golden Gate, we spent the weekend with my parents down in California’s Central Valley.  We went out to dinner with my Mom and Dad twice, drove them down to our niece’s birthday party in the South Valley, and had some interesting (and mildly uncomfortable) conversations about the fact that they’re getting older and how they’ll handle their house and property.

The one conversation that moved me the most, however, occurred at sunset on Saturday night, while we were sitting on folding chairs, just the two of us, out in the driveway catching the evening breeze.  The sun slowly sunk behind the house across the street, but Dad, in his poetic way, informed me that the sun was setting over the ocean.  We watched the stars come out, and he pointed out the planet Venus, then the Big Dipper, Orion the hunter, and the W of Cassiopeia.  We were wowed by a shooting star that screamed across the sky.  I noted several light planes crawl across the heavens, red lights blinking.  “They’re very far away,” Dad told me, “at least five miles.”

And then he reminded me that he, too, once flew such planes.  He told me it’s been 40 years since he’s taken the pilot’s seat.  Flashback:  I am about 14 or 15 years old, summertime, out for a day with Dad.  We played handball on the courts at the school where he was a driver education teacher, got haircuts, and had lunch before he took me out to the airport and showed me a Cessna up close.  He wanted me to get in and go for a spin, but I was petrified and refused.  He was disgusted.  My mother had forbidden me to ever go up with my father, for fear we’d both be killed.  She was unhappy with his hobby and, eventually, forbid him from going up either.  I still remember how upset he was.  Unfortunately, it was not the only time that he agreed to give up dreams to satisfy her.

I thought this was all in the distant past.  Until Saturday night, when Dad confessed that he’d been surfing the web to look at planes for some time now, and that he’d like to purchase one.  He reminded me that pilot licenses never expire.  He might have to go up with an instructor once to show he still knows how to do it, he suggested.  And then he really got into it, explaining that planes, like cars, have fancy electronics now that didn’t exist back when he flew.  “GPS was science fiction,” he told me.  You had to plot out your route and map it out with a pencil on the chart.

My father is correct that many things have changed in 40 years, with technology not the least of it.  But one thing that undoubtedly has not changed is my mother’s attitude.  I was too cowardly to ask how he intends to get over that particular obstacle.  Could it be that he’s finally reached an age at which he’s daring enough to defy her fiery will?

Dip a wing when you fly over our house, Dad.  Just like you did when I was a kid.

I’ll be watching for you. 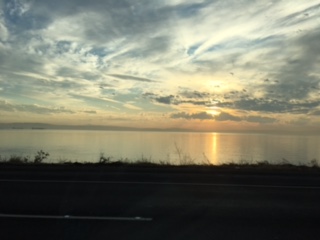