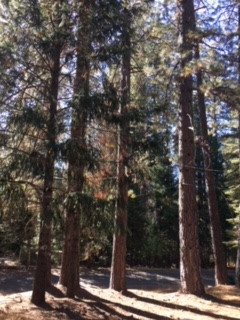 3800 feet up in El Dorado County.  Taken a few weeks ago, when the deciduous species among the evergreens were just beginning to display their autumn color.

It’s Halloween this week, and that can only mean one thing:  The annual start of NaNoWriMo and NaBloPoMo.

As much as I’ve enjoyed writing this blog, I’m not going to kid myself into thinking that I have it in me to write a novel.  I made a few very halfhearted (quarterhearted?  eighthhearted?) attempts in that direction in the halcyon days of my youth, which I always quickly abandoned due to a combination of lack of imagination, paucity of ambition and plain old horrible writing.  So good luck to the NaNoWriMo crew, and may the fruits of your labor not languish in your sock drawer or molder in the slush pile.

Having said no to the novel, what does that leave me with?  Well, there’s always memoir (everyone has a story, right?), but I’ve already written one of those.  Poetry?  I’ve dabbled in doggerel since the age of ten and, well, my poetry just plain sucks.  In the immortal words of A.E. Housman, “it gives a chap the belly-ache.”

That pretty much leaves me with blogging, among the few media other than Tweets and Facebook posts that one can get away with doing badly.  Doing it really badly may even yield the reward of many comments.  You may not wish to read such comments prior to imbibing in a pint or two, but there you are.

I have participated in NaBloPoMo thrice.  Each time resulted in at least a modicum of satisfaction (just for finishing, if nothing else).  One must respect the achievement of those who finish the marathon, even if in last place.  I’m far too old to be a millennial who was raised on trophies for participation alone.  Still, as Dr. Phil intoned during a recent episode of his show, the law student who graduates last in his or her class is still called an attorney.  (I have a few issues with that one, but okay.)

The above notwithstanding, there are only so many times one can make an effort as intense as that required by NaBloPoMo without going cross-eyed at the thought of doing it yet again.  If further excuses are needed, I will cite preparation for an upcoming Scrabble tournament in Arizona and hours at work that seem to grow longer and longer by the week.  Daily blogging was certainly a lot easier when I was unemployed.  Nothing against NaBlo, but I am a lot happier being employed, thank you.

It seems a compromise is in order.  While I will definitely not be blogging daily during November, I will endeavor to post at least weekly.

I figure that if my attention is diverted elsewhere, at least I can write about it.

My mother has pumpkins.

I know, so what.  It’s autumn, everyone has pumpkins.

Okay, so it’s not a first.  There was that time back in sixth grade when my parents took us on a drive upstate (upstate New York, that is) to the cider mill and let my sisters and I each pick out a pumpkin to bring in to school to help decorate our classrooms.  But that was a rare exception.  And a pumpkin at home?  Not likely.  Pumpkins were a big waste of money.  No one in our house was going to take time to make a pumpkin pie and, well, after a few weeks, a pumpkin just rots and has to be thrown away.

Several years ago, my sister visited my parents from out of town.  She had not been to their home in quite a while.  Driving into their street at night, she had some trouble remembering which house was theirs.  Now, my parents live out in the country where their neighbors raise horses and cattle and goats and such.  There are few lights to cut into the dark of night.  I have often sat with my parents on folding chairs in their driveway to watch the star show.  Out there, the stars twinkle in all their majesty and the constellations stand out just like in a book and you can’t help but think about God.  And when the Perseid meteor shower is going on, you can ooh and aah at the shooting stars just like at a pyrotechnic display on the Fourth of July.

For a moment, my sister thought she had found the right house.  But she knew she must be mistaken, for right next to the doorstep sat a large pumpkin.  And everyone knows my parents don’t do pumpkins.

But it was their house.

So my parents, nearly eighty years old and long retired, continue to surprise us.

Now my mother calls and starts out, as always, by berating me for not calling for nearly two weeks.  “Did you forget you have a mother and a father?” she asks.

She tells me about their visits to Kaiser and the tests they need to have and the pills they’re taking.  She tells me how the plans for the big family gathering on Thanksgiving are coming along.

Then she tells me she has pumpkins.

Okaaayyy.  I’m not sure where this conversation is going.

It turns out she’s not sure what one can actually do with pumpkins.  She will be buying a pumpkin pie, so that’s off the list.  She is leaving it to my sisters and me to figure out what to do with the darned things.

Well, I offered, for starters you can remove the seeds, place them on a baking sheet with a little salt and toast them in the oven.  As for the flesh they call pulp, well, the pumpkin is a gourd, a type of squash.  If you cut it into chunks, you can use it in a stew, or if it’s more mushy, you can bake it in a casserole.

“Maybe you can make it into French fries?” Mom asks.  Sure, I say, why not.  If you can have sweet potato fries and zucchini fries, I don’t see why we can’t invent pumpkin fries.  As a vegetarian, I’m game.  Bring on the olive oil.

It will also be Hanukkah, so perhaps we can invent pumpkin latkes as well.

So I look forward to taking a sharp knife and cutting a circle near the tops of those orange beauties.  Then I’ll flip their lids and throw the stem in the trash.  I’ll have plenty of assistance from my niece and nephews.  Or if not assistance, at least they’ll be there to laugh at my amateur efforts.  Either way, we’ll surely figure out something to do with all that pulp.  I wouldn’t want my parents to think their purchase was wasted.

I have no doubt that pumpkins, along with maize, were among the staple foods of the Native Americans among whom the Pilgrims settled in the seventeenth century.  As for me, I believe that God created pumpkins for one reason only:  So that we can remove their tops, cut a goofy grin into their exteriors and stick a glowing candle inside to light the early winter nights and warm the hearts of children and adults alike.

Yesterday, the WordPress Daily Prompt encouraged bloggers to describe the strangest place they have ever found themselves posting to their blogs.

As a creature of habit, I prefer writing my blog posts from the comfort of the living room sofa, laptop dangling precariously off the TV tray on which it is balanced.  However, due to our travels up and down the state of California, I have composed numerous posts from our laptops in motel rooms.

What I find particularly challenging is writing blog posts on my iPhone.  I have done so on several occasions, late at night at Motel 6 in Buttonwillow, Kern County.  Now, Motel 6 generally (but not always) charges for wi-fi, so we typically skip the laptop and make due with our phones.  My fat fingers dance across the tiny keyboard display, stopping every third or fourth word to correct an error.  The backspace key is my best friend.  Even so, when I get back to a computer I usually notice more than one typo that makes me want to scream.  And I won’t dwell on the times I have mysteriously lost an iPhone post in progress, nor will I refer to some of the words that have come out of my mouth on such occasions.

Far more interesting than the mundane locales from which I have blogged are the places from which I would like to blog someday.  I am not engaging in fantasies about exotic destinations here.  In fact, I am reminiscing about places that I enjoyed on the other side of the country in the days before the Internet.

It’s October, and inevitably my thoughts return to the riotous red and yellow leaves that set the trees afire in New England and upstate New York.  I am just learning to use Twitter, and if I did not have time for a complete blog post, I imagine I would tweet something like this:

JUMPING IN A PILE OF LEAVES INSTEAD OF RAKING.  WHEEEE!!   #foliage

It is apple season, and right now I am munching on a Gala, one of California’s finest.  And while I enjoy the wonderful Fujis, Pink Ladies and Galas out here, it’s not the same as picking out a bushel of Macintosh, Delicious, Cortland or Rome Beauty apples from Dressel Farms on Route 208 in New Paltz, New York.  If I were there, I’d blog about the giant pumpkins out front, the Indian corn grown on site and, if the cider press is operating, the season’s first sweet taste of liquid heaven.  After I got home, I’d be sure to mention the wonderful scent throughout the house when Mom was stirring a pot of applesauce on the stove and had a pie in the oven.

DRESSEL FARMS IN OCT IS THE APPLE OF MY EYE.  YUMMY!!  #hudsonvalleyautumn

I’d ooh and aah at the bucks, does and fawns that walk out of the thickets and stand wide-eyed along the grassy edges of the Palisades Interstate Parkway.  Then I’d blog my outrage when every other car heading south from Bear Mountain Circle has a dead deer tied to its roof.

Along with everyone else, I’d gripe about the leaf-peeping tourists slowing down traffic with their gawking.  Of course I’d forget to mention all the money that they are pumping into the local economy and how many businesses couldn’t survive without them.

I’d definitely blog from Old Sturbridge Village in Massachusetts, describing the candle dippers, the blacksmiths, the printers and the butter-churning maids.  My post would probably make fun of the 18th century costumes and the little kids running amok with ice cream sticky hands.  And I’d be sure to post a photo of the cows and turkeys.

I would do my best to blog from the Emily Dickinson House in Amherst, Fitzwilly’s restaurant in Northampton, the covered bridge over the Ashuelot River in Swanzey, New Hampshire and the shops in downtown Brattleboro, Vermont.  And just for old time’s sake, I’d have to finish up my time travels by writing a funny post about a round of Glowgolf at Holyoke Mall.

THE DAYS ARE COOL, THE NIGHTS ARE COLD, I NEED TO VISIT NEW ENGLAND IN AUTUMN AGAIN BEFORE I GET TOO OLD.    #nostalgia