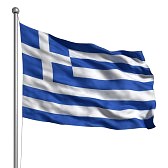 Had I the slightest bit of artistic talent, I would have headed up this post with a cartoon that looked something like this:  Greek Prime Minister Alexis Tsipras and German leader Angela Merkel would be sitting across a table from each other.  Tsipras would have an enormous goblet of Greek olives before him, which he would be slowly sharing with Merkel.  The caption would read “Two for you, one for me!”  In the next pane, Merkel would take the single olive off of Tspiras’ plate and move it to her own.

If you’ve been following the shenanigans in Greece over the past few weeks, you probably understand to what I refer.  If not, I’ll make it incredibly simple by stating that Greece is billions of euro in debt to Europe and that it has approximately zero chance of ever paying it back.

The complicated part is the politics.  Greece is broke and missed an important payment deadline at the end of June.  Should the nation’s creditors put up with this and risk setting a precedent that their loans need not be repaid?  Or should Europe refuse to extend yet another bailout to Greece, causing the nation to leave the Eurozone, quit the euro and return to its former currency, the drachma?  Perhaps that would send a message to other profligate European nations… but perhaps it would be the wrong message.  Perhaps European nations with struggling economies (think Italy, Spain, Portugal) will figure that defaulting on their obligations wouldn’t be so bad; after all, they can just go back to the lira, the peseta, the escudo.  And there, of course, goes the whole European Union.  A Greek exit from the euro, which the media has of late been referring to as a “Grexit” (eye roll here), could potentially pave the way for the whole idea of a united Europe to come tumbling down like a house of cards.  Perhaps the real lesson for Europe here is that their union is built upon the sand, not upon a rock as they would have the world believe.

It’s not as if the European Union, the International Monetary Fund and other creditors don’t have any compassion.  They offered to lend Greece more money in exchange for “austerity.”  Now, it’s not as if Greece hasn’t already been up to its eyeballs in austerity.  To even get this far, it had to cut pensions, raise taxes and lay off government employees.  This, of course, created a lot of problems, not the least of which is that the people are sick of it.  More than a quarter of working age Greeks are already unemployed.  With the country’s stagnant economy, that has little likelihood of changing anytime soon.  As for elderly citizens on fixed incomes, let’s make it even more difficult for them to survive, by golly!  That’s right — acceding to Europe’s demands would involve slashing pensions by another 40%.

Of course, Rome… er, Greece, wasn’t built in a day.  Sure, taxes have been raised, but reports are that they’re not collected particularly vigorously.  And the government is by far the largest employer in the nation.  As is common in Europe, employees receive six weeks of paid vacation annually.  And then you can retire — at age 38, with a full pension.  Must be nice, eh?  And it’s not like you need to move to Florida or Palm Springs or Costa Rica to enjoy your retirement.  That’s because you already live at the sun-kissed intersection of the Mediterranean and the blue Aegean.

So it shouldn’t come as a surprise that some want Greece to pay dearly for its perceived economic profligacy.  Drive those spendthrifts to their knees and make them pay dearly for their sins!  Germany is seen as being the standard bearer for this camp, with Merkel being backed by Eurogroup head Jeroen Dijsselbloem.

But it’s not as if Greece was about to give up without a fight.  For a while, it seemed that Greece could hold all of Europe hostage with the threat of causing its precious union to come apart at the seams.  You want to hold it together?  Bail us out!  Again.  (And again, and again.)  Europe wasn’t about to put up with this.  So Greece had to prove that its threat was real.  Tsipras and his finance minister, Yanis Varoufakis, asked the Greek parliament to put the matter to a vote of the people.  Should we cave in to austerity measures that are worse than what we have already experienced?  Or should we tell Europe to go to hell?  You know, do the Grexit thing and merrily go it alone?  Tsipras argued the latter and his parliament agreed.  The vote was slated for last Sunday.

It almost didn’t happen.  There were issues of constitutionality and procedural irregularities such as the fact that the people are supposed to be provided at least two weeks of notice prior to a vote, not the one week they received.  But the Greek Supreme Court gave the green light and voting booths were hastily assembled from Athens to Thessaloniki to the isle of Rhodos.  Tspiras went on national TV and radio and urged the people to reject austerity.  Proud Greeks, stand up to Europe!

Photos of the Greek people demonstrating against European oppression appeared around the world.  In the streets and the squares, in front of government buildings and on the islands, large OXI (“No!”) signs seemed to appear everywhere.  There was a significant “yes” faction, too, of course, those who believed that Greece should stick with the euro for better or for worse.

The vote was thought to be a dead heat.  My wife and I were out of town at a Scrabble tournament in Reno, and I followed the action on my iPhone with bated breath.  Rumor was that a “yes” vote would constitute a vote of no confidence in the ruling liberal Syriza party and would leave Tspiras with little choice but to resign.

But Tspiras did not resign.  In fact, he won.  The people agreed with him, with about 61% voting OXI.  Instead, Varoufakis, his finance minister, resigned the next day.  I had to laugh when The Washington Post reported that he lived up to his “bad boy” image when he followed his announcement by walking out of the ministry building and riding off into the sunset on his motorcycle, his wife on the back.

But all that was Sunday and Monday, ancient Greek history.  In the intervening four days, a lot has changed, notably the mood of the nation.  Having your banks shuttered for two weeks, with a daily limit on ATM withdrawals of 60 euros per day, could do it.  (It is estimated that if the banks were to reopen, the ensuing run on deposits combined with virtually nonexistent cash reserves would cause the banks to be out of money in less than an hour.)  Shortages at the supermarkets and empty gas tanks could do it.  Fear of a deep economic depression has a way of engendering another type of depression entirely.  Somewhere around Tuesday, the defiance of the Greeks seemed to wilt along with the abandoned OXI signs.

After asking his people to vote “no” to austerity, Tsipras went right ahead and renewed negotiations with Europe for another bailout in exchange for more austerity measures.  He was quoted as equating his country’s predicament as a choice between “your money or your life.”  He’d have to choose the former, he said.  Clearly, someone forgot to tell him that you’re supposed to give up your life; you need your money for old age.

The Eurogroup is expected to make a decision on the fate of Greece today.  Despite the tenacity of some hard liners, the end result is preordained.  Greece will be bailed out yet again and its people, particularly tens of thousands of poor pensioners, will suffer even more.  The whole charade of the vote, proud defiance and cries of “Oxi!” will have been for naught.  Greece has turned into a joke, and a not very funny one at that.

Greece is not the only one caving in on this, however.  Germany, which has expressed a preference for providing humanitarian aid to ease the suffering of the Greeks rather than offering another fruitless bailout, is on the losing end, too.  In fact, all of Europe loses, as they flush ever more money down the toilet.  It’s a classic no-win situation.  There are only losers.  And I will bet a nickel that, before long, Greece will be right back where it is now, only even more in debt and more beaten down by endless austerity.  Meanwhile, you can support impoverished Greece by purchasing its exports:  Ouzo, olive oil, feta cheese, delicious kalamatas, Greek yogurt.  Oops, maybe not that last one.  Aren’t Oikos and Chabani made right here in the States?

I hope that, one of these days, some creative writer turns the current Greek debacle into a play.  It might be a tragedy or a drama, both forms that the Greeks themselves invented.  On second thought, it should be a musical.  Songs could include “Hopelessly Devoted to You,” performed in front of the Acropolis by Yanis Varoufakis and his biker gang; “Eurozone Dropout,” performed by Angela Merkel; “Look at Me, I’m Alex T,” performed by Tsipras and the Syriza Seven; perhaps finishing up with a resounding rendition of “We’ll Always Be Together” by Jeroen Dijsselbloem and the Moneymen.