TGIF!  Happy weekend to all those who worked all week and now have a chance to relax.  Now two weeks unemployed, every day is the weekend for me!  Not to rub it in or anything.

What I Learned This Week:

Blogs I discovered and enjoyed this week:

Blog posts that most moved me this week: 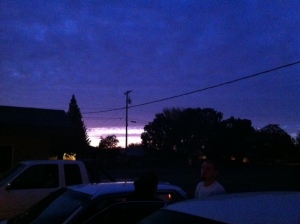 Twilight outside our new digs.  In silhouette are my nephew and niece.  After spending hours digging a trench to try to fix the gas line to the social hall, my nephew had to drive back over here to help my niece when her car wouldn’t start.  If you listen very closely, you can hear my grandniece in her car seat screaming her fool head off — just because she can.