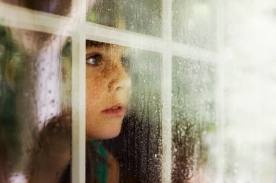 Barbara Shelly, who writes for the Kansas City Star, recently praised the relaxation in prescription standards for the “morning after pill” that makes it available to minors.  However, she muses, this is supposed to be an emergency measure for use when traditional contraception fails, a Plan B, if you will.  What, then, she asks, is Plan A for teen sex?

Is it the use of condoms?  Hmm, the health curriculum in just about every middle school and high school includes the lesson in which the proper use of condoms is demonstrated by fitting a rubber onto a banana.  Much snickering and a little embarrassment ensues. (But not much of the latter among today’s jaded teens.)

Oh, you poor thing, did the bad condom break? This could happen, of course, but probably not!  The guy needn’t worry about carrying a bowling ball around for nine months and then having his guts ripped open, so what incentive does he have to make sure he has a condom with him and is wearing it properly?  Exactly none.  The threat of AIDS and other STDs do not seem to resonate in the heat of passion.  Some say that the above indicates that the woman must take the responsibility for her own birth control.  At the age of 14 or 15 or 16?  Get real.  Not happening.

All of which leads Shelly to ponder that “the problem is, we really haven’t figured out how to convince young people not to have babies.”

Abstinence, a delay of sexual activity, would be the logical answer, she suggests before recognizing that this, too, is not going to happen.  Hormones will rage and Mother Nature will do her thing to keep the species going into future generations.  No amount of banana condoms or carrying around an egg or a crying Betsy Wetsy doll for weeks is going to change this.

The only thing that can make progress toward increasing the rate of teen abstinence is a healthy dose of social approbation.  This, of course, went out the window many decades ago, and it ain’t comin’ back.  The “good girls don’t” motif is dismissed out of hand without so much as a belly laugh.  Way back when, teenage girls didn’t want to “get a reputation.”  Straying meant being “sent away,” either for an illegal abortion or to give birth (and generally to give the baby up for adoption) out of sight of family and friends.  In other words, sexual activity came with consequences.

Today, those consequences constitute more of a red badge of courage than a scarlet letter.  Single motherhood is glorified in the media.  There is a country song that declares that a woman who doesn’t have at least two children by the age of 21 is going to be alone forever.  And then there are TV shows like Teen Mom 3 that don’t sugar coat the hardships of single motherhood, but do make the statement that it can work out and, hey, everybody’s doing it, right?

Many parents are unwilling to talk to their teenage girls (and fewer to their teen boys) about peer pressure, bodily urges and the consequences of early sexual activity that may affect them for the rest of their lives.  “Let the schools do it” seems to be the attitude, or let them figure it out for themselves.  Their friends will tell them what’s what (and we wonder how misinformation spreads).

My mother, however, did discuss this subject with my sisters as they approached puberty.  I believe her approach was effective.  She had this important conversation before the picture window in the living room of our suburban home.  Her speech went something like this:

“Look at those girls walking down the street.  They look like they’re laughing and having a good time, don’t they?  They’re kind of dressed up.  Maybe they’re going to a party.  You’ll have plenty of chances to do just what they’re doing.  But not if you have a baby.  If you have a baby, you’ll be stuck in the house, rocking the baby, feeding the baby, changing diapers, dealing with a sick baby throwing up all over you.  Meanwhile, while you’re sitting here with the baby, you’ll be looking out this window at the girls going out to have a good time and you’ll wish it were you. And your heart will ache.  But it won’t be you.  No parties, no fun, no dates.  No boy is going to want to have anything to do with you because you will be stuck at home cleaning up pee and poop and vomit.”

It worked.  Neither of my sisters got pregnant until they had been married for a while.  And it’s not as if they were deprived as teens.  They had dates, they had boyfriends, but they also knew what the consequences of stepping over that line could be, and they made sure the guys kept their hands to themselves.  Some of the other girls thought my sisters were hopelessly out of date, but they remembered the “picture window” speech and they dealt with it.

Of course, this was more than thirty years ago.  I am not at all certain that my mother’s speech would have the same effect today.  I think of my niece, who managed to get pregnant at the tender age of fifteen and whose baby recently turned a year old.

I don’t know whether my niece’s mother ever sat down and talked with her about what life would be like with a baby.  Perhaps she did and perhaps my niece shrugged it off as just another dumb thing that adults try to force on you.  Perhaps the fact that my niece’s father left when she was three years old has something to do with it.

Don’t get me wrong:  My little grandniece is a delight to the entire family and we are all so glad she is here.  I just wish she had waited a few more years to make her appearance, and that during those years my niece would have completed her education, embarked on a career and started out in life with a man who is utterly devoted to her.

My niece is luckier than most.  Yes, she is struggling to balance a full load of college classes, working part-time in a fast food restaurant and caring for her baby.  But she has lots of family around to provide day care, to give her time to do her homework in the evenings and to be there for the little one when my niece has to work late on the weekends.  Last night, my niece was working on an assignment until 3 a.m. This morning, she texted my wife, who went right over there and picked up the baby so that my niece could get some sleep before her afternoon class.

Many young mothers don’t have this intense level of family support.  Estranged from family, they pinch pennies to pay for day care, or lacking that, are unable to work and end up on public assistance as they slip into poverty from which it is difficult to recover.

Fathers certainly need to talk to their sons about what it means to be a man and to take responsibility for their actions.  It is sad that too few fathers are around to have such conversations.  But as for the mothers of teenage girls, I highly recommend drawing open the drapes and launching into an honest discussion in front of the picture window.